To detect Alzheimer's disease and other forms of dementia early on and monitor progression, there are several cognitive evaluations that can assist professionals in a diagnosis.

The Montreal Cognitive Assessment is an accurate test that can give examiners insight into a person's cognitive ability.

The Montreal Cognitive Assessment (MoCA), developed in Canada in 1996, was intended to be a means of accurately detecting levels of cognitive impairment. The assessments in the test attempt to gauge areas of language, visuospatial abilities, memory and recall and abstract thinking, to give a representation of a person's current cognitive ability.

The MoCA is administered over approximately ten minutes, with 30 possible points. The test is made freely available to any clinician, and its international use allows it to be administered in 35 different languages.

There are 11 sections of the assessment, with a total of 30 possible points:

The total possible score is 30, with any score higher than 25 considered normal. Any score of 25 or less is considered to be an indication of some form of cognitive impairment, which can predict or identify the onset of dementia in patients.

The MoCA has been tested for reliability, and researchers have concluded that the test is a useful and accurate means of detecting mild dementia. However, it is necessary that the test be administered by a professional, and accompanied by a primary means of diagnosis. 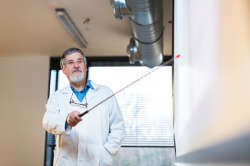